I was writing a draft for this blog and had stopped to think [it's harder than it used to be] and a kissing bug walked across the desk to my hand and started up my fingers. I was able to scoop it into a Scotch tape dispenser and go get my camera for pictures. I thought a warning was in order as most people know nothing of it's insidious nature.
Kissing bugs usually crawl onto the victim while they sleep and bore holes in them and suck or lick the blood out. If you find a row of three to six little red spots on your body and slight itching in the morning, they are probably the cause. You wont lose much blood but there are possible side effects.
When a Kissing bug sucks enough blood to fill itself up it turns around and poops right where it was eating. As the bite starts to itch and you start to scratch and rub the poop into the wound you could contract a disease called Chagas. Chagas is a horrible and debilitating disease that can take up to twenty years to kill you. And, the worst part, there is no cure.
Fortunately, it is very rare here in the states. However it is rampant in central and south America. I read where as many as ten million people could have it. There has been only a few cases of it in Texas and most of those people have been out of country before.
However, a customer of mine that lives down the road, and used to run a hunting ranch in south Texas, has had to put down sixteen of her hunting dogs that have contracted it. They traced it back to illegal aliens that worked on the ranch. The medical officials don't know how the dogs contracted it but think that there may be other ways to contract the disease. A&M University is helping her out with this and has tested over twenty of the bugs that she has caught on her place all with negative results. You can Google this for more information. I thought I would pass this along. 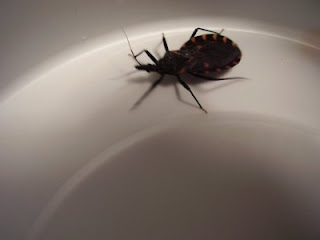 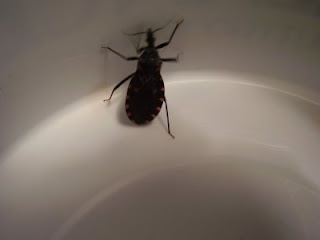 Eww! Never heard of this before.

I just purchased the TEXAS BUG BOOK today at the Natural Gardener and decided to see if this bug was listed -- it was. You are correct about contracting Chagas from bites. The book explains that they prefer the blood from poultry and animals. Humans are a last resort.

The bites are usually on the lips, eyelids, or ears of the victims and is painless. If your house has no bedbugs (their choice of dinner) then YOU are the target.

Here's an interesting tidbit. It has an anesthetic that it injects so you can't feel it feasting and gorging on your blood. If it feels it needs to defend itself, it can use its sucking snout to STING -- the pain extremely intense, lasting for weeks or months.

Good grief! I hope I don't have any near my house. Upon closer inspection I wonder if that is what I had misidentified earlier as a stink bug...

I learn something everyday...

It's stuff like this that makes me still feel Transplantable to somewhere else rather than permanently Transplanted to Texas.

Annie at the Transplantable Rose

Bob, in that picture you posted, it reminds me of a stink bug. Is it that large? Eeeewwww, how on earth did you recognize it?

Robin, I know about them only because of the lady that had the dogs that had to be put down. I felt so sorry for her as she really loves her dogs.
My pictures weren't very good so I will add that their back is boat shaped and they have little orange dashes at the edges. No other bug I know has those little orange dashes so it would be an indicator that it's a Kissing Bug.

I am horrified to think that we have bed bugs here in Texas. I remember my father used to talk a lot about bed bugs from being abroad during the war. He always checked the beds out first. Thanks for the identification, I'll be checking out my garden bugs.

Ugh. Bitey things are always nibbling on me at night. I just hope it's not these. (Usually it's just mosquitos.)

How big are these bugs. Are they easily visible to the eye. If so, then they are (I hope) not what's biting me.

i was whacked by this pesky creature last month and it gave me a nasty eye and hand.oh man it was really horrible! it itched like hell and my left eye was swollen like a golf ball and my left hand was like a boxing glove.

see my article regarding that at

Bed bugs have gotten bad! I've been reading a lot of material from http://www.pestmanagementinc.com/ on bed bugs. You should check it out.Bed Bugs Texas

are they in north texas? as in mckinney?

"Illegal aliens"?? Wow, that's a pretty pitiful political pitch in a blog post that has nothing to do with immigration. Many, many farm workers are not "illegal", but here on temporary farm worker visas. Absurd way to ruin an interesting post.