Tuesday morning found me sitting on the porch, drinking a cup of coffee and talking to Lyn's brother from Las Vegas. He was really enjoying the quiet of the country and the serenity of my gardens, so different from life in Las Vegas. I noticed my Lacy dog, Bonnie, sniffing around the back of the shop where Lyn's clothes lines are stretched. She was just walking along with her nose to the ground, probably trailing what ever had walked there last night. Suddenly, she jumped backwards. I knew it had to be a snake and immediately called her to the house. Great dog that she is, she came right to me and I put her in the house. My brother in law and I went to investigate. Being raised east of Austin where we had a an abundance of every kind of snake I spotted the little rattler immediately, it was only about 18" long but coiled up. I was amazed that my brother in law could not see it until I made it move. I stepped on it to hold it down and got Chris to get my camera so I could take pictures. Looking at the pictures I was amazed at how camouflaged it was. 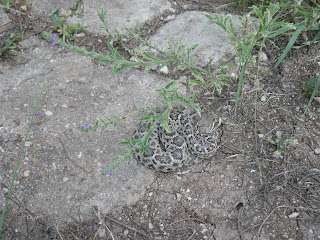 The closer I got it still stayed camoed. 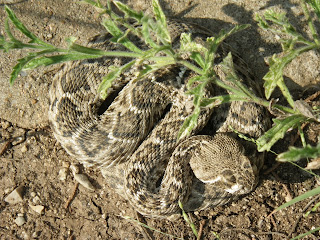 Up close, you can see the patterns made up of blacks, greys and even white that makes it so camoed. 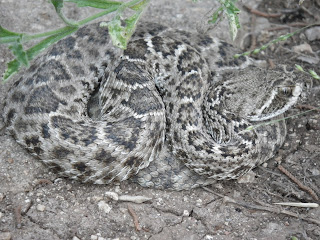 Lyn came over to look at the snake while I was scooping it up to put it in a bucket. She went back to the house and then hollered that my dog wasn't acting right. Up to this point I hadn't thought that Bonnie had been bit. I really couldn't imagine her getting bit as she is so fast. I went to the house and found her sitting in the kitchen, not moving. 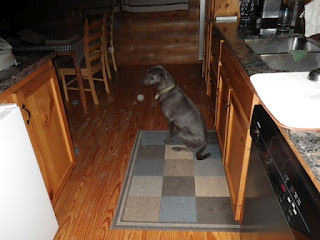 I called her and she didn't move. I went to her and could see the fang holes in her muzzle. I looked at her gums and they were white. Just then she started to shake and I knew it was bad. I scooped her up and headed to the vet. By the time I got there her body was racked with the shakes and I started to worry. I had called ahead to let them know what had happened so my vet, Dr. Lynne Randoll, scooped her out of my arms as I walked in the door. Bonnie ended up having to stay the night and all the next day before she could be released. She still looked horribly swollen but Dr. Lynne assured me that the swelling was much reduced from earlier. She could hardly keep her tongue in her mouth. I really felt sorry for her. 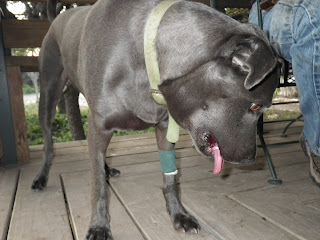 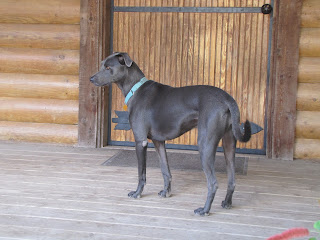 Dr. Lynne said she had five other snake bites in the last week so take this as a warning to be on the look out for poisonous snakes in our gardens and yards.
Posted by Bob at 11:19 PM 21 comments: