A Yard With No Lawn.

It's been a busy winter with lots of hard work and many decisions made on major garden design changes. A few years ago, when we had fifteen inches of rain in two days, the entire back yard washed completely off. The yard had been covered in several loads of dirt that had been spread by hand. The grass was a native grass blend that we had gotten from Native American Seed in Junction, Texas. It had made for a nice, water stingy lawn and I was very happy with it. I knew there had to be changes or the wash out would just happen again.

Shortly after that I had been talking to a garden blogger friend, Pam Penick that has the blog Digging about her ideas about doing away with lawns all together. I had already done away with the front lawn after seeing other blogger friend's front yards with no grass. Lori Dawl at the Gardener of Good and Evil and Cheyl Govea of Conscious Gardening have stunning front yards and I went with a similar design for mine. Pam has since written a book on doing away with lawns, it is called Lawn Gone. I knew it was time for me to do the same.

The amount of work that it would take was rather daunting but I had just bought an old but good Bobcat skid loader that would make things a little easier. I started looking for big rocks to scrounge and was lucky enough to hit pay dirt a couple of times. 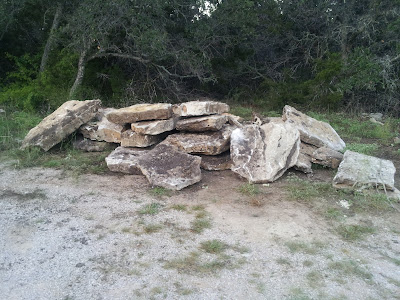 We had gotten a smaller batch the year before and made a bed around some trees. We filled in behind the rocks with good dirt to get a better planting depth and put the plants in. It looked so good that I knew we were on the right path. The idea behind this build was to make level beds to take some of the slope out of the yard and give more planting depth as there is so little soil. This was before I got the Bobcat but was certainly a deciding factor in getting it. Lyn was just too much of a light weight to handle the rocks by hand so I had to put most of them in place.
That bed had been completed for a year before I got the big load of rocks. We started by pulling up the dead fruit trees and grading the ground to shape. Bonnie did not like me being on that machine with out her. 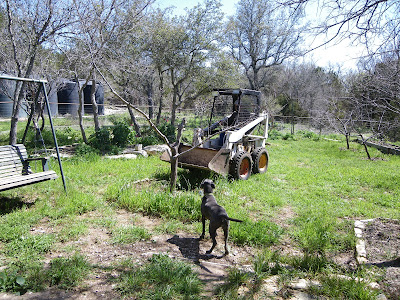 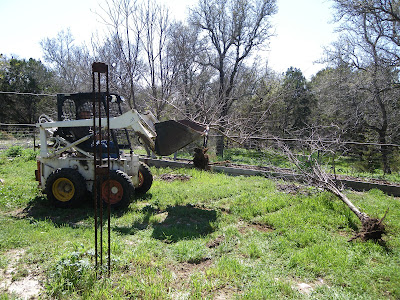 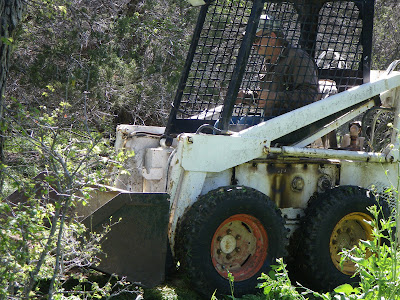 While I was clearing some brush out side the gate I happened to notice a rat snake going through the trees. I pulled up until I was right under him and got my camera out of my shirt pocket and took a picture. 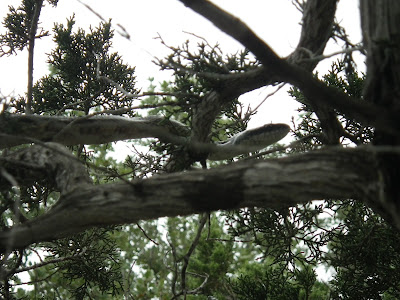 I was about to back up when I noticed what he was up there for. He had killed a half grown cottontail rabbit and dragged it up the tree while trying to get away from me. 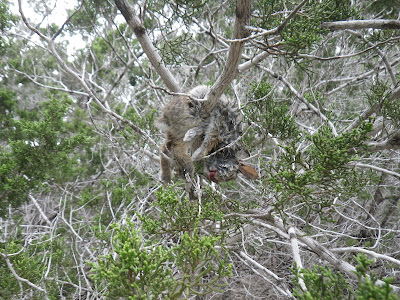 It didn't take long to realize that my ground was too rocky and hard and my new found rocks were too big for my little Bobcat. I was lucky enough to find another, bigger Bobcat for a steal of a price and bought it. Digging out the new beds was a snap with it. 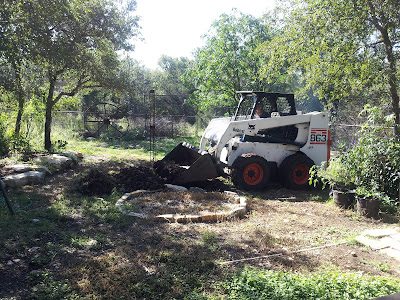 When I started to move the rocks around, I could tell the bucket just wasn't the right tool. I built a set of fork lift forks that would attach by way of the Bobcat's quick detach system. It made moving the rocks a breeze. You can see them on the front of the machine. 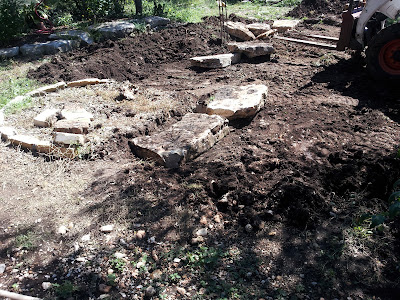 It started to look like I was just making a big mess. 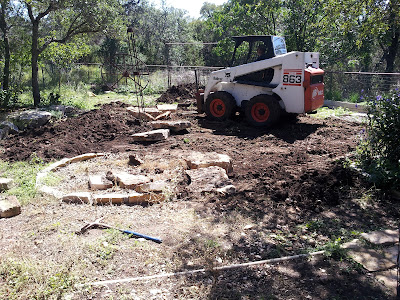 After the first row of rocks were down, I could start to see that my plan was going to end up like I wanted it to.I not only dug the ground level where the rocks would sit but had dug the ground level to the back of the bed. Once filled with good soil, it would make for much more depth for the plant's roots. Here is a picture from the back porch. The first layer of rocks are down and you can see the dug out area where I will fill in with dirt after the second layer of rocks goes down. 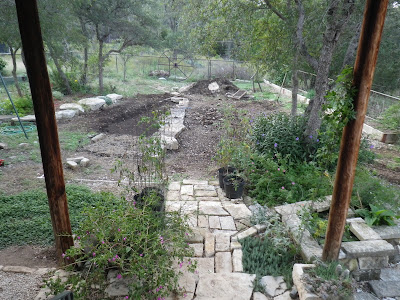 This bed is planted now and all the gravel walk ways are in and it looks great but this post is getting long and I will show the finished project next post.
Posted by Bob at 10:42 PM 14 comments: