I have had more than my share of armadillo problems through the years, both at this house and our previous house. From my vast experience at the previous house and what I know about armadillos from seeing them all my life, I have tried to make my gardens as armadillo proof as I can. I have still caught several inside the yard and had to haul them down the road. I have trapped a couple in live traps with the "Herd em' to the door V" set up that I devised. I really should patent it, as it is that good.

The middle pond sticks under the fence so that the local deer can water. One armadillo was swimming under the fence to get in. As rocky as the ground is around here I can only imagine just how juicy all my dirt looks to an armadillo. Yeah, the digging is good in here.

I would think with all the catching and trapping and hauling off that there would be no more armadillos for a long ways around. I guess that I just don't know how fast they can breed. Armadillos have what is called a quadranted egg. It takes one sperm to fertilize it but then it splits into four eggs. They are all exact duplicates and are the same sex. 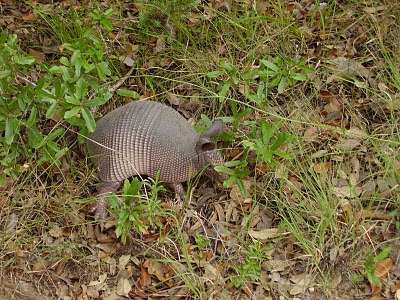 But wait, what's that moving in the brush? Not another one. 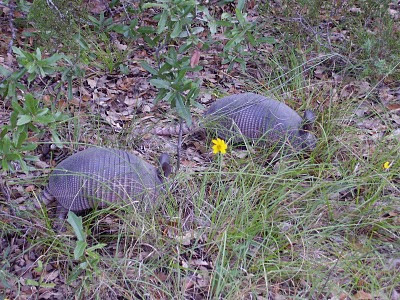 Who would believe, two armadillos in one picture. But wait, what the heck? 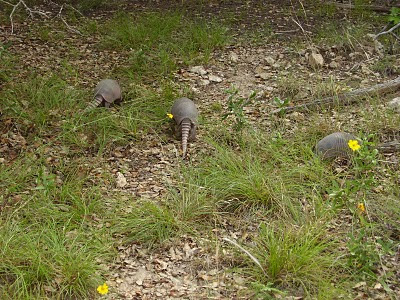 This is unreal, three armadillos in one picture after only getting one picture in the last ten years. Way cool. But wait. Oh my gosh, here comes another one. Now there is four of the destructive little bull dozers. 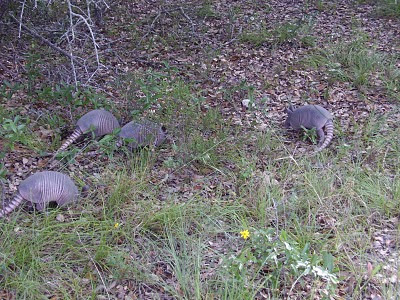 Even though they look to be mostly grown, I am sure it must be a litter that is sticking together longer then usual as I've seen much smaller armadillos rooting in the woods all by them selves. Even though I know I will have to be dealing with them eventually when they find the house, it was still nice to get to watch four armadillos rooting along through the woods along my driveway. 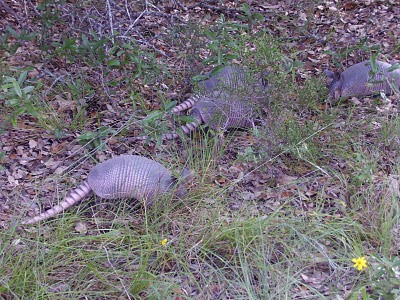