Work on the rain water collection system has been going slowly. Friends have been busy so moving them has been impossible with just Lyn and me. Also I just had no idea how difficult it would be to level them to the first tank. I had no illusions of perfection but thought I could keep them within an inch or two so as not to lose too much of capacity. The plumbing has been extremely difficult and has changed from my first concept of how it should be.
The inlet hole in the top of the tank is only 1 1/2". Where the water comes out of the gutter is 4". You don't have to be too bright to figure that the four inch line would have to be attached to several of the 1 1/2" lines or water would be lost. That was my first plan but after hooking up the first tank I could tell that the weight of the PVC pipe would need supports. Sometimes it is better to just start over and that is what I did.
This is the first configuration. 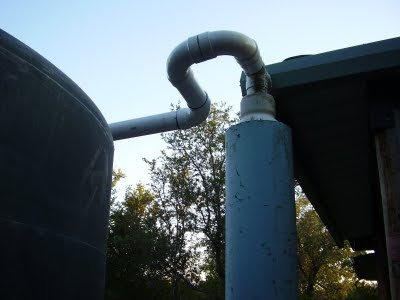 I really didn't like this as I would have to have a line to every tank. It finally registered that I could just drill a hole in the center of the top and put in a larger line. I already had a 4" hole saw bit so I went with 3" PVC as the outside of the fittings are 4" and it would be a perfect fit that I could caulk to keep mosquitoes out of my water. The unused 1 1/2" holes would be the over flow holes and I could easily put screen wire over them for mosquito protection. It is also a little easier to do the plumbing as I can get by with only having the inlet line go to three tanks.

I now have three tanks hooked up to receive water. The new hook up looks like this. 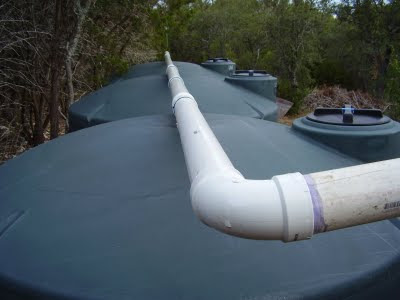 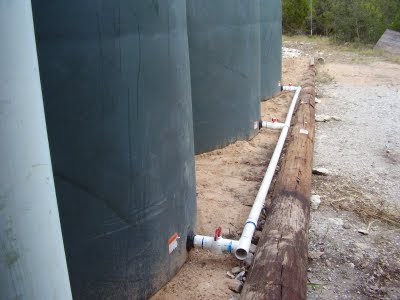 All I have to do now is level off 50' more ground, shovel in a lot more sand, move and level five more tanks and do the plumbing only on the bottom of them, and then I can start on the pump and filter house. I'll keep you posted.

The big goldfish give-a-way got rid of about seventy goldfish. It helped but was no where close to the number we need to move. Lyn has been running her trap line several times a day getting the little ones out and moving them to some tubs in the back. The tubs make for easy extraction when we find a sucker, errr, I mean someone who needs fish. We called Hill Country Water Gardens and asked them if they wanted any little goldfish and were surprised to learn that they needed fish in some of their ponds. You can see in the picture there are a lot of little fish in the buckets. I would guess a little over a hundred. 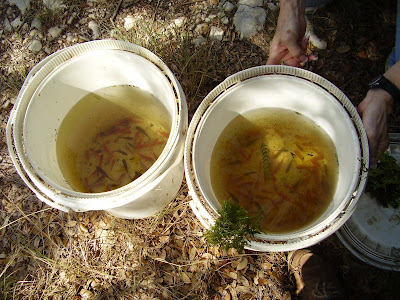 The fine folks at Hill Country Gardens are some of the nicest folks around and I didn't mind helping them out as they were helping us out as well. I would say that there is at least a hundred more that will have to come out of the big pond so if anyone out there needs any goldfish just let me know. They are in all colors, most but not all fantails. Other wise they are going here. 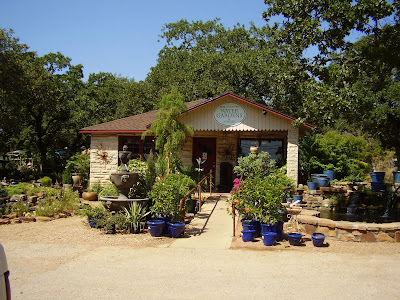 I was playing with my dog this evening and seen a red and black streak go by, close to the ground. I immediately ran for my camera. I had wanted to get a picture of one of these wasps for a long time. It was a Tarantula Killer. It's a huge wasp, second in size only to the Cicada Killer for wasps in central Texas. This one was almost two inches long. They have bright red wings and an evil black body, the kind of black like a Black Widow spider. Like all non nest wasps they are very non aggressive. Even though they will take other spiders, Tarantulas are their main prey. They only take the male Tarantulas as the females are just to big for them to fly with. It's hard to believe that this wasp can fly while holding onto it's prey that is several times bigger than it is. However I know this to be true as Lyn and I got to witness it at our house when we lived in Liberty Hill. We had been working in the garden and were sitting on the porch steps, resting and enjoying a Shiner. I saw the Killer looking around and under the rocks that made up our walkway. I started to explain to Lyn about them when suddenly the wasp went under a rock and drug out a Tarantula. He had a hard time of it. When they were out in the open, the fight was on. It actually looked like the spider was winning for a while. We noticed that the spider started to slow down in it's movements. The wasp flew off. I thought, what's going on here, you kicked his butt and now your leaving. I have learned since then, the wasp was checking on the hole that the spider would go in. A little while later the wasp returned, flipped the spider on it's back, folded it's legs together neatly, grabbed onto the legs, and flew off, low to the ground. I felt that this spider was about as big as this wasp could handle as it could barely fly with it. You see, the wasp didn't kill the spider, it merely paralyzed it. If it had killed the spider it would rot before the egg that the wasp would lay on it, would hatch. The wasp stuffs the spider into a hole, lays an egg on it and covers it up. When the larvae hatches it eats the paralyzed, but still fresh spider. [This is where the much more computer savvy, Philip, at ESP blog, would insert a picture of the guys in the Alien movies all trussed up, but still alive] Think about this, for every egg that the wasp lays, it has to risk it's life fighting a much larger prey. I like 'em. 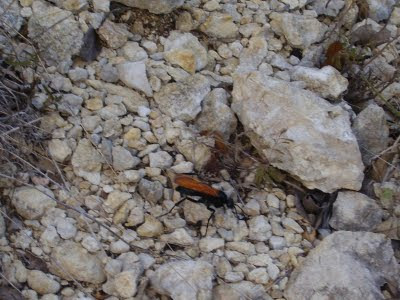 I had to crawl through a lot of Petunias to finally get a shot I liked. I'm telling my wife that the dog mashed them down. This is my first time to enter this photo contest. It sounded like it would be fun and it was, certainly a different view. Here is my entry. 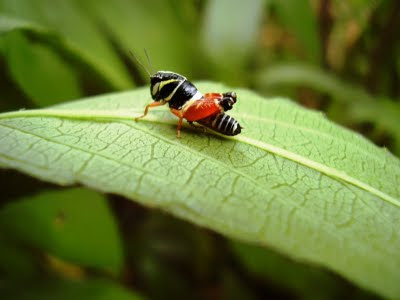 Watch out, it's a Vinegaroon

A friend dropped by today, recently back from a hog hunting trip in the panhandle. No hogs. His group was staying in an old house on the ranch. Just after he went to bed he felt something crawling on his foot. He turned on his flashlight and saw a huge bug on his foot. He jumped up, screaming like a little girly man. Everyone got up with lights and then they found a bunch of them. Whip Scorpions or Vinegaroons [Mastigoproctus giganteus] are not poisonous but they are ugly and big. He told me everyone slept in their trucks the rest of the trip. He scooped one into a coffee can and brought it back with him. He knew I would want pictures. He tried to catch a big one but couldn't. The one he brought back is a medium size one-he says. 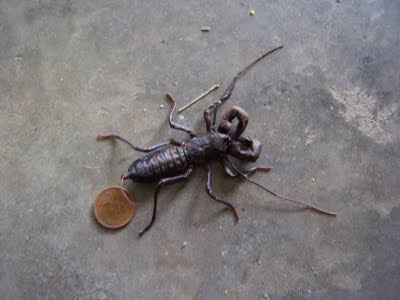 You can see the whip tail here. They sling a vinegar like substance out of it, hence the name. 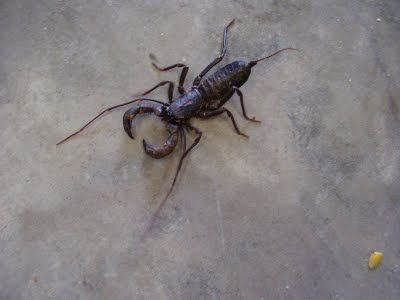 You can see that it has two pincers on each forward arm and both work. They use them to catch bugs as they are strictly meat eaters. With the penny in the picture you can tell it is a very large bug. Although it looks like a scorpion and is called a scorion, it really isn't a true scorpion. It's an interesting bug none the less. 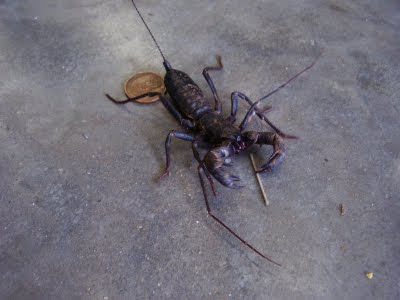 You don't see one of these every day

A gentleman [I can't remember his name] in my native plant club has one of the animal rescue operations. After our club tour here earlier in the year, he asked me if he could release a Ringtail close by the house here. There was everything that he needed to survive, especially the water in my ponds. I thought it over and decided it would be okay even though I know he will get some fruit off the trees next year. They are really cool little animals and I like the idea of having one around even though I think he is eating tomatoes to survive right now. I was pretty sure I saw him scurry off the other night from right at a tomato plant. Their main food source is berries and seeds, especially Hackberry seeds but they eat fruit and veggies as well. With this drought I'm sure my garden is his only food source.

When checking the next morning I found this. 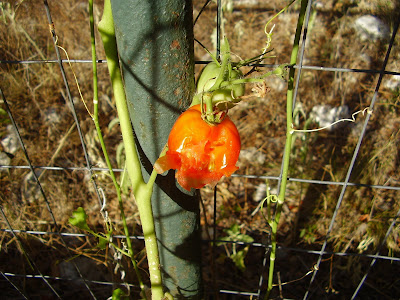 I don't really care though. He couldn't put a dent in the damage the Cardinals do. Here is a picture in the animal carrier before he was released. As you can tell by the huge eyes, Ringtails are almost completely nocturnal and this is probably the only picture of one I'll ever get. 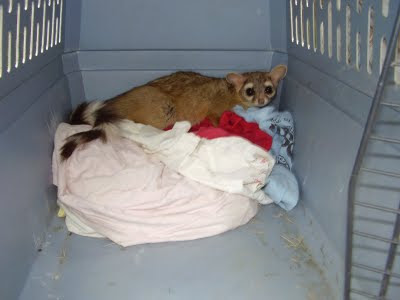