Most country folk and a some city folk know what an ant lion is. They make the little funnel shaped holes in the ground in dry loose dirt. When an ant or other little bug happens into the funnel, the doodle bug, as country folk call them, kicks up dirt to make the bug slide to the bottom of the funnel. The ant lion is waiting under the ground at the bottom and grabs the bug in it's pincers and drags him, kicking and screaming, out of sight under the dirt. OK, maybe not kicking and screaming but my imagination says they are. I always think of  Hans Solo getting pulled down into the funnel in the desert after Jabba the Hut throws him off the ship. They also used the same funnel in the sand in the Enemy Mine movie where Dennis Quaid almost gets pulled under.

When I built my welding shop I noticed there were no ant lions there or any where around the house either. I've always liked having them as they really do help keep the ant population in control. I had them at the shop I had before this one so I captured a bunch of them there and let them go here. I got my ant lion capturing technique perfected. A skill that you wouldn't think would have much purpose. Well, you would be wrong there as it has helped me immensely.

I've had to bring these skills into play many times through the years as I did again just a few days ago. A man came to the shop to talk about a project and brought his little son and daughter with him. As you could imagine, a welding shop is a dangerous place for kids, a veritable disaster waiting to happen. I just tell the kids that I really need help capturing ant lions to move to another place and would they help me. Capturing any thing is a great job to a kid and the answer has always been yes.

I get a paper drinking cup, a grass stem and a plastic spoon, all the equipment needed. You tickle the sides of the funnel with the grass stem to see if they are home. If you see dirt kick up then one is home. Take the spoon and scoop up the dirt in the bottom of the funnel and pour it into your palm. Gently blow away the dirt and it will leave the ant lion in your palm, some technique required here. Put it in the cup and look for another one.

You have easily killed an hour of time for these kids while the adults talk business. What does an ant lion look like you ask? Here is a picture of the little bugger, a perfect under the ground dweller. Tremors on a very mini scale. I'm just glad they are not the size of real lions. 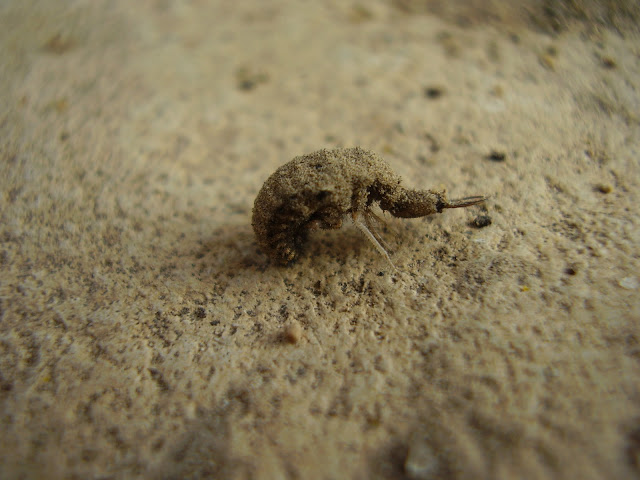