Last week I was able to get my friend Andy to bring his backhoe over to finish the excavating that the little Bobcat skid loader wasn't able to do. He did a very accurate job and I won't have to use a bunch of sand to level things out for the tanks. Lyn was very nervous with him digging so close to the existing tanks that were full of water from the recent rains. I wasn't the least bit worried as I've seen Andy operate so many different pieces of equipment and he is very good on them all. He bales hay for a living and is always running huge tractors and dragging even bigger implements and I've never known him to damage anything. He knows I'm a plant person and always asks before he drives over or plucks out any plants. He drove the backhoe seven miles here, did all this work, and drove it seven miles back home and would not hear of me paying him a cent. That's a true friend and I know I'm a lucky guy to have several of these true friends. I don't think he reads my blog but if he does, thanks Andy, I owe you. 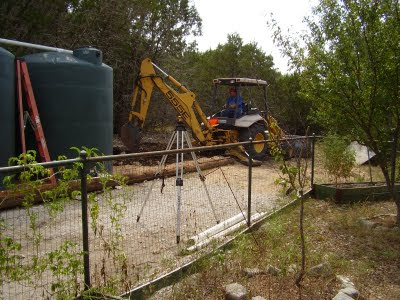 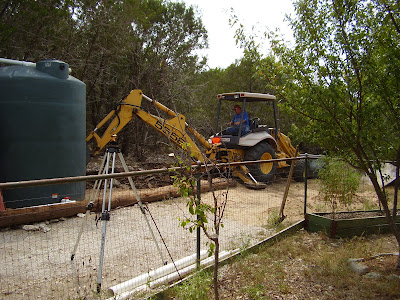 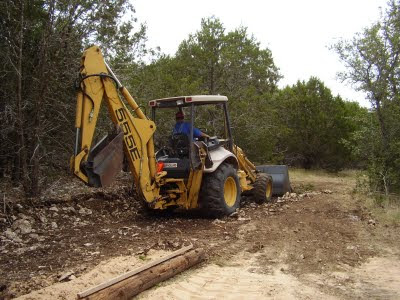 The next day Lyn and I were back to shoveling sand and making ready to move a couple more tanks in. Getting the sand at the same level as the existing tanks is hard work and takes a lot of time. Moving the tanks around is even harder. They really aren't that heavy, around 400#, but they don't have handles. I weigh about 185# and Lyn weighs about a buck ten so pushing these around is really tough. We got it done, however, and now I'm ready for the rain on Monday and Tuesday.

It's starting to look quite impressive. With the eight inches of rain we had last week, all of these would have been full. As it was, we got 9,000 gallons in the tanks. The tubes at the top are the overflow tubes. I made them long enough to have the overflow fall beyond the pole that holds the sand back. After the last rain it was evident that it was important to do it as we had a major washout of sand. There is screen mesh over the ends to keep mosquitoes out. 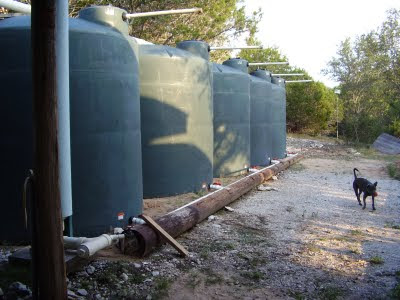 Here is one of the reasons I'm doing this. This is the entrance to the Lauren concrete plant north of Seward Junction on Hwy 183 at 3:00 in the middle of the day, watering their driveway. Talk about wasting water. Hardly any of it is falling on the grass. That's my drinking water they are wasting. 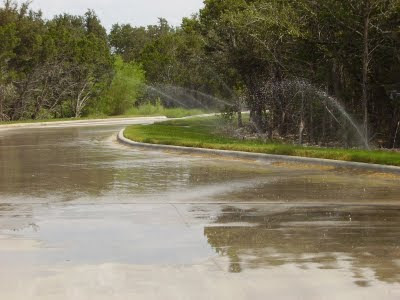