The Last Tank Is In

The last tank went into place last week and it was a job. I havne't been able to round up the usual suspects to help in a while now so Lyn suggested we do it our selves. She hates starting a project and not staying on it until it's finished or at least until your at a good stopping point. When doing something like this I have to ponder the situation a while, first to make sure it's doable for us and second, that it can be done without her getting hurt. It's not the same working with heavy stuff with a 120# woman as it is with a 200 plus pound man. When it comes to work, Lyn doesn't know quit, and I try to watch out for any danger that would involve her. These tanks weigh close to 400# so going slow and being careful was paramount.

Lyn and I  moved the last three tanks into place in one evening. As with the others the leveling after getting them into place was the hardest part. This is the last tank loaded onto the trailer. The Chief, in her normal work attire looks satisfied but a little pooped. It really was hard work but then again, we make a hellava good team. 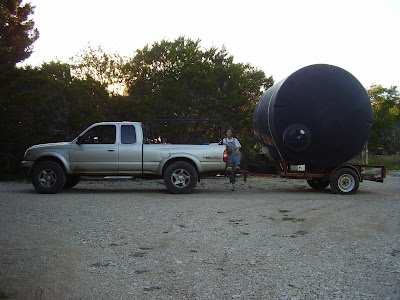 All tanks in position now and plumbed up. Next I start the pump and filter house. I'll keep you posted when we start and build it. 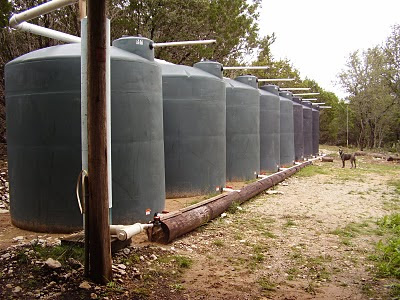 Day before yesterday, the now almost famous Nursery Crawl, where Cheryl of  Conscious Gardening, and Randy of Horselips horsesense go nursery hopping, came to Draco Gardens. It was a fun time had by all. These are two of the most fun people I've ever had the pleasure of spending time with. They both have a great sense of humor, really know their plants, and are polite enough not to mention the weeds. As any one who reads their blogs knows, they always eat Mexican food for lunch and drink a margarita. It was my job to pick the restaurant. We couldn't eat in Georgetown because the city is dry so we had to eat at Jardin Corona in Liberty Hill. I was pretty nervous in my choice as these two are serious critics of both Mexican food and margaritas. I think they liked their meal and their margaritas but it's hard to tell because they are nice people and I don't think they would say it if it was bad. You can check out the whole story on her blog to get the true scoop. I know I will. 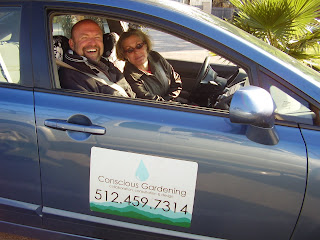 If you ever get a chance to spend time with them or visit their lovely gardens, don't miss it. They are just plain good ol' folks.
Posted by Bob at 11:56 PM 3 comments: