I had another garden project recently that was metal. It was a gate for Hill Country Natives Nursery in Leander. Mitch and Kathy Mitchamore own the nursery and love garden art. I like going to see them just to look at all the really cool art work they have. I've done several pieces for them and like their sense of style. They know what they want but let me design it. I like that.

Recently they had a rock fence built separating the front display gardens from the actual nursery. The rock work on the wall was stunning but Mitch decided he wanted something more. He had Larry Hullums, a really good stone artist, build an arch over the opening in the wall. Then he decided that it needed a gate. That is where I came in. He told me he wanted to keep it simple and it needed an arch to blend with the stone arch. He let me take care of the rest. 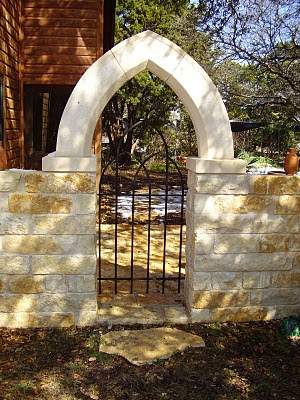 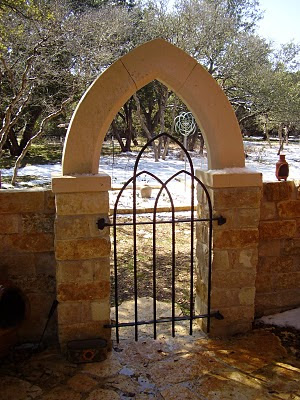 It's hard to believe that only a couple of days ago there was four inches of snow on the ground and did not get over 31 degrees and today it was 62 degrees and not a cloud in the sky. That would be all systems normal for central Texas. I've lived in Texas for all my life and can count the times we've had snow on both hands. It's good to have a snow every eight or ten years but I wouldn't want it every year all winter like it is up north. Here's some pictures of the snow at our place. 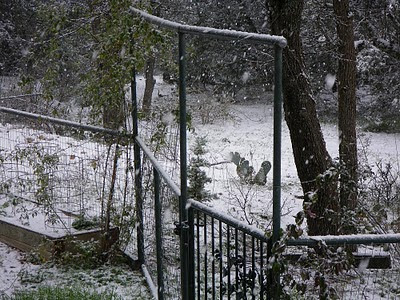 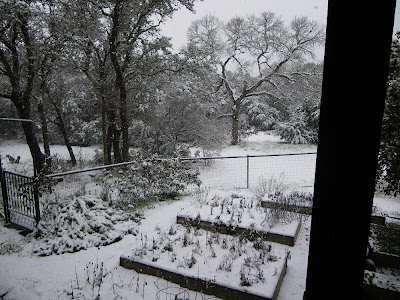 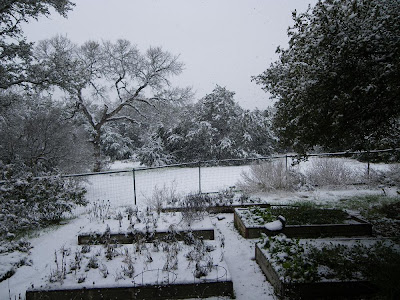 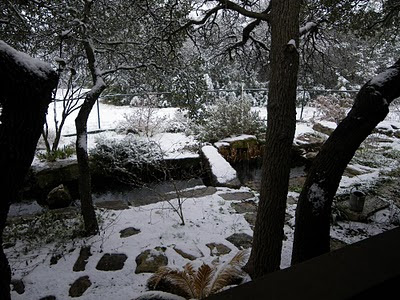 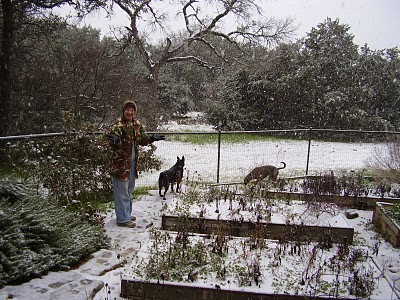 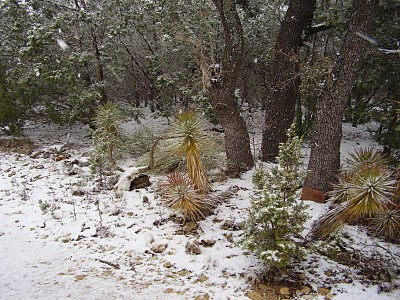 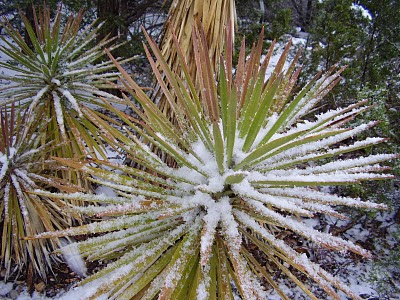 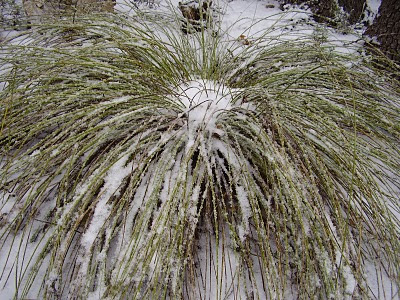 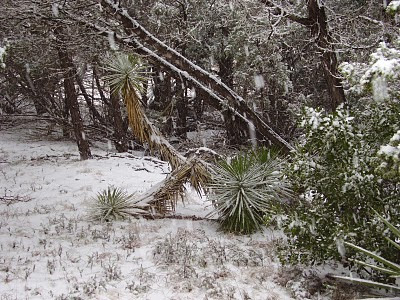 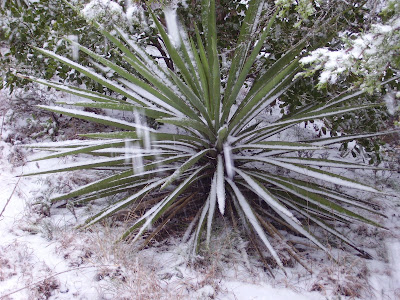 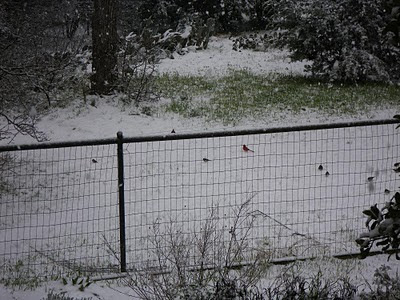 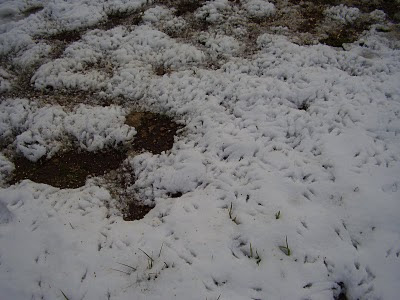 I always like it when my love of gardening and my job come together. Metal just looks good in and around the garden whether it's gates, sculptures, trellises, or just knick knacks placed among the plants. I've had a couple lately that are not the norm of what you think of in regards to metal and gardens. It's hand rails and stair rails. One is needed and one is for effect. 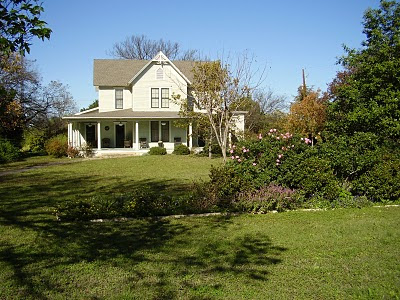 The first was for the Meyer house in Georgetown. I first talked to George and Barbara in the fall but as I'm always a month or two behind I just finished it recently. The house was built in 1878 by one of two brothers that owned the lumber yard in town. There is an identical house across town that was owned by the other brother. The house is filled with era furniture that the Meyer's have bought through the years. Only the kitchen and a den have modern fittings and appliances. It was very interesting to look through it. The house has six exterior doors but the back door is the one leading to the garage and garden house.

Barbara loves to garden and I got a great tour of all her gardens. The land the house sits on takes up an entire city block in both directions so there are lots of gardens. The problem was getting down those back stairs to the garden house. Barbara is 80 years young and wouldn't hear of any one else doing her gardening for her, although she does get some help from time to time. I want to be just like her when I'm eighty.


She had one plant that I really liked but she couldn't remember the name. It has variegated leaves and pretty pink blooms. She said it had been in her gardens for over twenty years and it had spread through a lot of them. She said she would give me one in the spring. 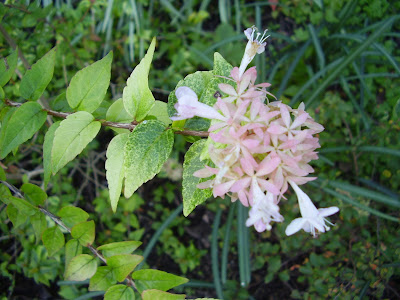 Barbara looked through pictures of other handrails I have built and chose a selection that she thought would go with the old house. I didn't think so but it's not my house. I chose a roughly textured powder coat finish for a surer grip for her as the stairs are rather steep.


This is George by the finished railing. 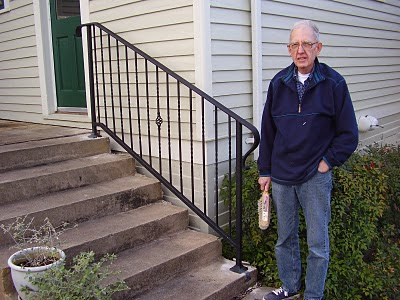 You can see the rough texture on the shoe and added turn down here. The screw was painted black. 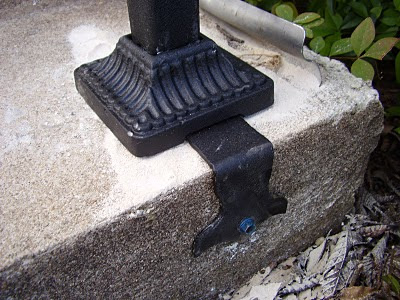 The next one is for a house in Berry Springs where the people were doing a remodel of the patio, pool and the flower beds in the back yard. The people that this was for are both graduates of UT. If they ever decide to sell, it will have to be for more UT fans though. They are also big on all things Texas and the hand rails really show it. They graduated in the early eighties and the longhorn cut outs are of the longhorn symbol used at that time. 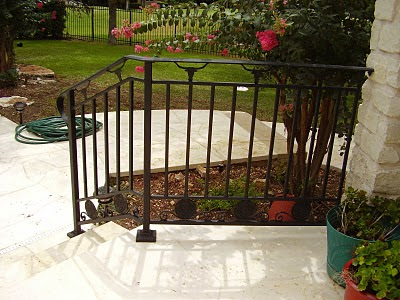 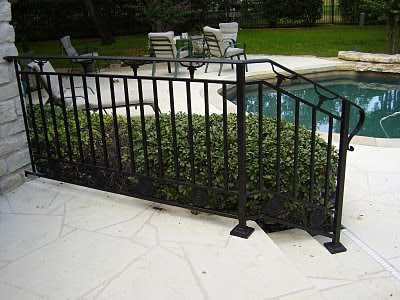 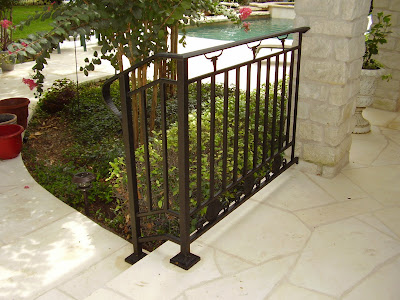 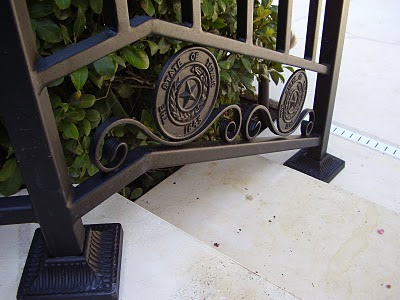 They also had me make four towel hooks out of the medallions that were on the bottom of the rails but bigger. 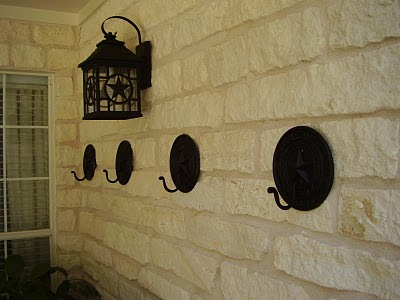 Although I still have to build barns, cattle pens, horse stalls and work on heavy machinery, I like doing the ornamental stuff best. When it has to do with gardens it just makes it that much better and hardly feels like work at all. It fulfills my inner urge to build things and when those thing are beautiful it's really fulfilling.

I'm doing a walk through gate for Hill Country Natives nursery right now. It goes in a rock wall with a lime stone arch over the opening made by rock artist Larry Hullems. Larry did a stunning job on the arch and I hope the gate, also done in arches, compliments it appropriately. I will post some pictures of it when I'm done and have it installed.