I put in a long, hard day today. I was putting the finishing touches on a horse barn I'm building for a customer. I got home right at supper time and ate, but I knew I needed to keep going for a while. I just can't stop that suddenly after a long day in this heat. I need to taper off to a stop.

I decided to take a walk. I am so lucky in that respect. The Corp of Engineers property around North Fork Lake is right behind my house. It's only a couple hundred yards to the water, and that water is the absolute upper end of the lake when it is at normal pool level, so you have standing water and a river running into it. It's really beautiful and I'm lucky enough to have it so close by when I need to go walk about. Of course I took a camera.

Before I even got out of the gardens I spotted a Coral Snake by the raised veggie beds. I got a quick picture before he got into the Powis Castle. It was a pretty big one as well. 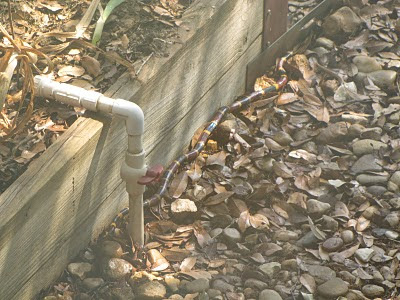 After going through the back walk through gate, I turned onto the trail. As I walked by my neighbors place I noticed his calves playing king of the mountain on a mound of dirt. They do this a lot. 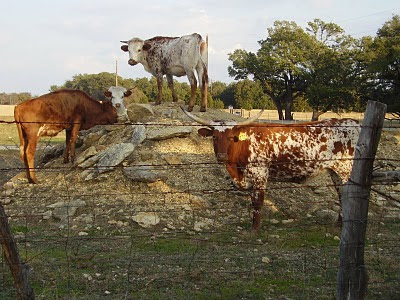 Leaving the calves to the watchful eyes of Ol' 272, I stayed on the trail I had built nearly fifteen years ago when we first bought this place. I was lucky to find an old road bed going down the hill into the river bottom. I cleared it out, with Lyn's help of course. It is like a tunnel in the cedars, openings on both ends and not much of a way out through the middle. In cooler seasons I would be on my mountain bike instead of walking. I noticed the big Summer Grape vine at the top had already lost most of it's leaves in this oppressive drought we are in. The leaves just don't have that crisp, bright color of fall leaves. 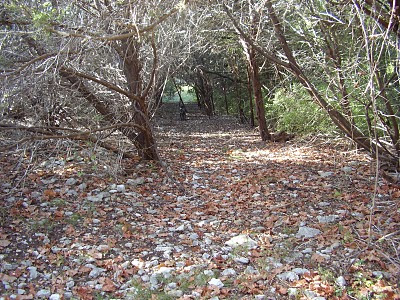 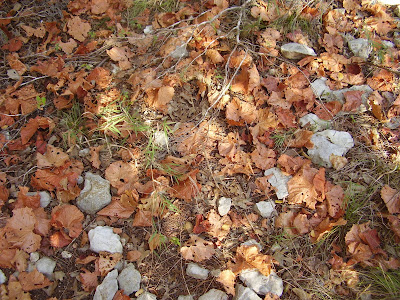 Even as thick as the brush is along the tunnel trail there is still some nice scenes, thanks to the fading evening light. 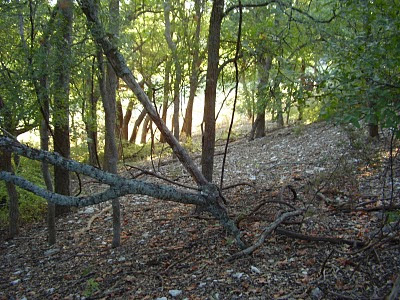 Before dropping down into the shadows of the tunnel I noticed a little life and death in nature taking place. A big ladder spider had caught itself a big buffalo grasshopper and had it trussed up neat as a pin. Just about every one I know calls these banana spiders. I always think of the Alien movies when I see this as I know the grasshopper is still alive, biding it's time until eaten. 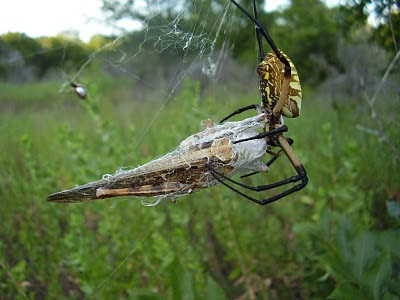 After exiting the evening darkness of the tunnel I noticed the wild plums were having a fairly good year even with it being dry. They do have the advantage of growing in the riparian zone and in central Texas that is a big advantage. The moisture in the soil here is enough to grow a completely different assortment of plants that won't grow above it. 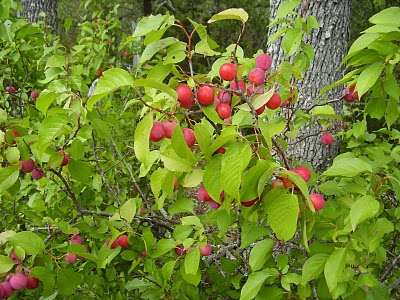 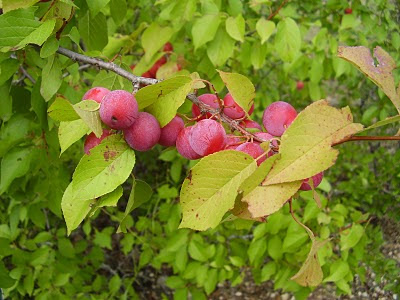 They look tasty don't they? You don't want to eat them though. They are a solid ten on the pucker factor scale. One bite and your lips are further back than your tonsils. Leaves a chalky taste in your mouth as well. Oh yeah, you know I've tried them before.

The Saw Leaf Daisy's were just about to have their big show. A few were already blooming but there were thousands that were almost ready. I almost never miss the big show, it's rather spectacular. 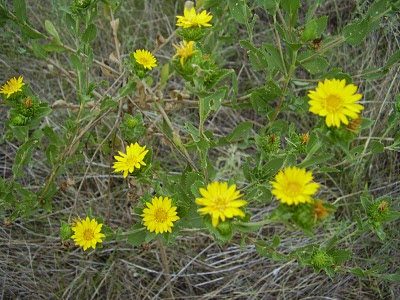 With these daisies the petals don't fold out but grow after the flower is formed. I much prefer the looks of the blooms when the petals are almost non existent. 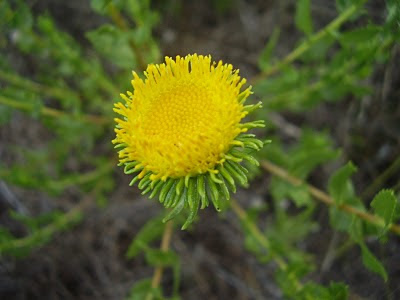 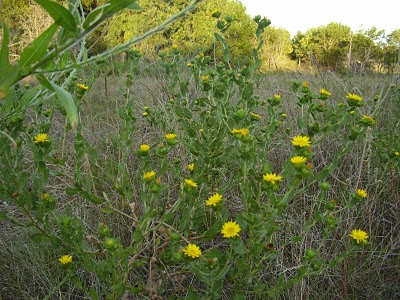 I can't imagine why they are called Saw Leaf Daisies. 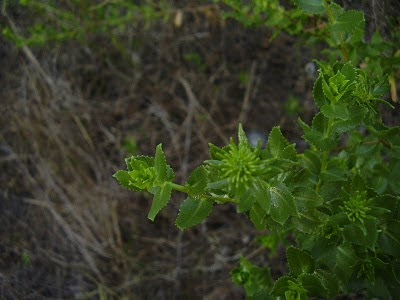 I finally waded through the thickets of Saw Leafed Daisies and got to the road. I wanted to check on the lake level and river flow while I was down here. Just before getting into sight of the water I came upon one of the most vividly colored of the flowers we have around here. I did not alter the color of this picture at all. The colors look almost fake but they are not. It is Eryngo, prickly looking but only for people with secretarial hands. Those colors are almost electric looking. 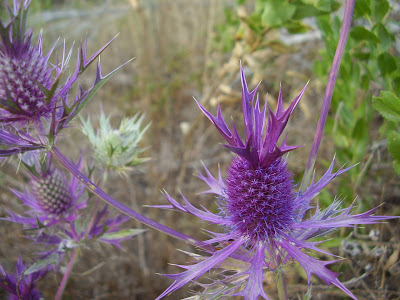 One look down river and I knew it was bad. With the last of the demon sun's rays on the cliffs, the view was beautiful but there just isn't the water there should be. I looked around and was pleasantly surprised to not see any trash. Some times it is so depressing to see what we humans can do to something this beautiful. 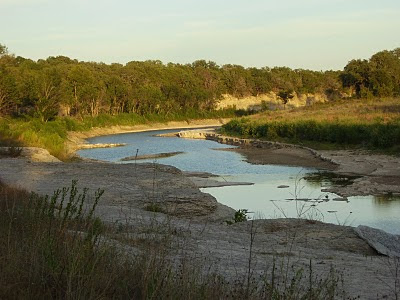 I looked up river and it showed the same lack of water that should be there. Man we need some rain. 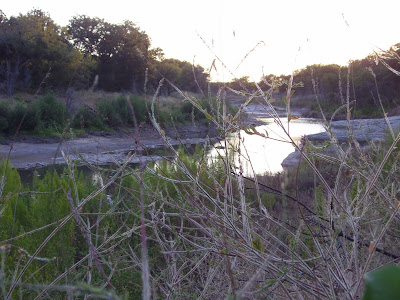 I headed back to the house. As I exited the cedars, the view of our place looked pretty good. The nice neat row of cisterns, the fruit trees, the flower beds and the log house that we built with our own hands. I liked the neatness of it but it didn't look terribly out of place with the natural world we had tried so hard to keep close. 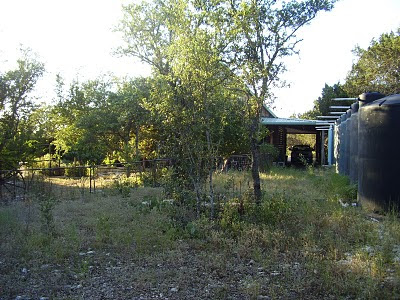 Here at the start of the trail is where we had buried two of our dogs and I'm sure where we will bury the ones we have now. I like it that they are here by the trail they so liked to traverse. 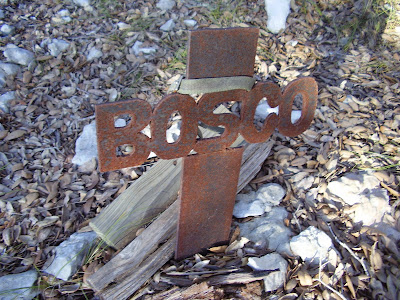 As I started forward I noticed a cloud of reddish dust start up at one of my boots. It was the pollen of a star fungus. Every one called them devil's snuff boxes when I was a kid. They have a thick, tough outer shell that protects the pollen until the time is right. It splits into pie slices and peels back to reveal a softer membrane that has the pollen inside of it. Some of these are very poisonous if you inhale much of the pollen. In the olden days they would say you were dealt the Devils Hand if you were poisoned with it. I think it takes a long and painful time to die. 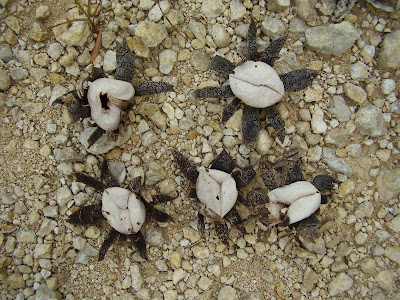 You can see the pollen dust here. Looks just like Garrett snuff to me. 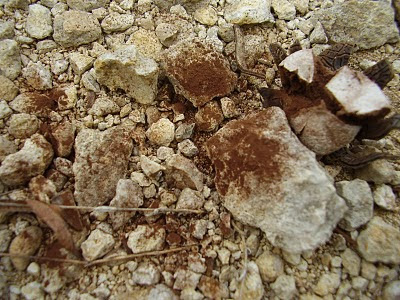 I got back to the house to find out that our old dog, Pepper, had up chucked 15 peach pits and some blood. Looks like a trip to the vet tomorrow. Oh well, it was still a good walk.

Where The Buffalo Roam

Agnes, a lady in my native plant club has spent years turning the back part of her property into a natural prairie. I think of it as ungardening to have a prairie, but in actuality it has been very hard gardening work. She has had to hunt down, then buy, plant and hopefully naturalize plants that were endemic to her area when it was all prairie. She was talking to her good friend Christine about how she thought it was finally a real prairie. All it lacked was a buffalo. Well Christine, conniving Queen of Gabions, decided she would get Agnes a buffalo for her birthday and called me. She wanted a cut out of a buffalo with stakes on it to stick out in Agnes' prairie. I love welding jobs with gardening themes. Oh yeah, I get all the fun jobs. Here I am with Agnes, out on the prairie, you know,where the buffalo roam. 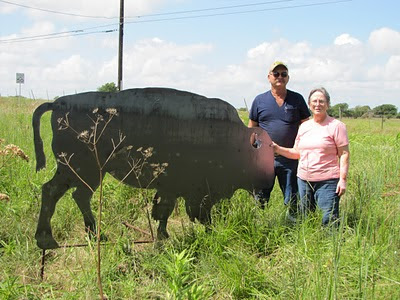